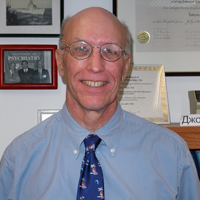 Dr. Woody graduated from Amherst College, received his M.D. from Temple University, interned at Bryn Mawr Hospital, was a general medical officer in the Navy, and trained in Psychiatry at Temple. He began work with Dr. Charles O’Brien and colleagues at the University of Pennsylvania and the Philadelphia Veterans Affairs Medical Center‘s Drug Dependence Treatment Unit in 1971 and has a long-standing interest in treatment outcome studies in the U.S. and abroad. His first international study was with Dr. Pechansky in Porto Alegre, Brazil on the spread of HIV among cocaine users. This study was followed by NIDA-funded studies with Drs. Zvartau and Krupitsky at Pavlov State Medical University in St. Petersburg, Russia on naltrexone treatment of opioid addiction and the spread of HIV. This work provided a background for the study that led to FDA approval of extended-release injectable naltrexone for opioid addiction. His international work continued with NIDA studies of methadone for HIV+ and HIV- opioid addicted patients in Kiev; a study comparing Suboxone with methadone for buprenorphine injectors in Tbilisi; a study of counseling for methadone patients in Jakarta; and a study of naltrexone for amphetamine addicted patients with Drs. Tyrfingsson, Runarsdottir, and Hansdottir in Reykjavik. He has authored or co-authored over 350 papers and chapters, served on grant review committees for NIDA and NIAAA, been Principal or Co-Investigator on many grants, and mentored 5 international NIDA-funded international fellows on addiction treatment and research. He was awarded a Doctoris Sui Causa from Pavlov State Medical University; the McGovern Award by the Association for Medical Education and Research in Substance Abuse; with Dr. Zvartau, a NIDA award for international research; and with Drs. Zvartau, Krupitsky, Lioznov and Samet, the 2016 Prix Galien Award for contributions to treatment and HIV prevention among underserved populations in Russia.

The HIV epidemic generated a high level of interest in addiction research, particularly treatment research, due to it association with injecting drug use, and drug use and unprotected sex.  The result was targeted funding from the National Institute of Health for studies on ways to prevent HIV among drug users and treat those who were already infected.  Funds became available for international studies and NIDA and NIAID sponsored meetings where U.S. and international scientists met, shared thoughts and experiences, and developed concepts for studies whose findings could be applicable to both settings.  Three things became immediately apparent: first, many international settings have addiction treatment infrastructures that are stable and funded by national health services; second, treatment providers are often MDs, PhD, or MSW’s – very different from the U.S; and third, international colleagues were interested in research but had no funding and, with a few exceptions, little experience.

Studies that emerged from these meetings and their developing collaborations involved modifying research approaches so they fit into existing services and included: 1) studies confirming the relationships between HIV, drug use, and HIV; 2) the impact of methadone and buprenorphine maintenance and detoxification on drug use, HIV risk, and adherence to addiction and HIV treatment; 3) training international investigators; 4) naltrexone treatment for opioid and amphetamine addiction, both areas that had been difficult to study due to limited inpatient treatment and high dropout in the U.S.

This presentation will provide snapshots of studies that have been done in collaborations with investigators in Brazil, Ukraine, Republic of Georgia, the Russian Federation, and Iceland.  It will end with comments on the contributions of these and other international studies to treatment and research within the U.S. nd the countries where they were conducted.