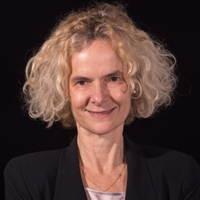 Dr. Volkow’s work has been instrumental in demonstrating that drug addiction is a disease of the human brain.  As a research psychiatrist and scientist, Dr. Volkow pioneered the use of brain imaging to investigate the toxic effects and addictive properties of abusable drugs.  Her studies have documented changes in the dopamine system affecting, among others, the functions of frontal brain regions involved with motivation, drive, and pleasure in addiction.

Dr. Volkow was born in Mexico, attended the Modern American School, and earned her medical degree from the National University of Mexico in Mexico City.

Dr. Volkow has published more than 550 peer-reviewed articles and written more than 90 book chapters and non-peer reviewed manuscripts on neuroimaging for mental and addictive disorders.

During her professional career, Dr. Volkow has been the recipient of multiple awards for her pioneering work in brain imaging and addiction science.  She was recently named one of Time Magazine’s “Top 100 People Who Shape our World” and was included as one of the 20 people to watch by Newsweek magazine in its “Who’s Next in 2007” feature.  She was also included in Washingtonian Magazine’s 2009 and 2011 list of the “100 Most Powerful Women” and named “Innovator of the year” by U.S. News & World Report in 2000.

Abstract
Addiction Is A Chronic Brain Disease – What We Know Today

Addiction is a disorder that involves complex interactions between genes, development and the social environment.  Studies employing neuroimaging technology paired with behavioral measurements, and more recently genetics, have led to remarkable progress in elucidating neurochemical and functional changes that occur in the brains of addicted subjects.  Although large and rapid increases in dopamine have been linked with the rewarding properties of drugs, the addicted state, in striking contrast, is marked by significant decreases in brain dopamine D2 receptor mediated signaling.  Such decreases are associated with dysfunction of prefrontal regions including orbitofrontal cortex, cingulate gyrus and dorsolateral prefrontal cortex and impaired striato-frontal connectivity.  In addiction, disturbances in salience attribution result in enhanced value given to drugs and drug-related stimuli at the expense of other reinforcers and promote inflexible behaviors.  Dysfunction in inhibitory control systems, by decreasing the addict’s ability to refrain from seeking and consuming drugs, ultimately results in the compulsive drug intake that characterizes the disease.  Discovery of such disruptions in the fine balance that normally exists between brain circuits underling reward, motivation, memory and self-control have important implications for designing multi-pronged interventions for the prevention and treatment of addictive disorders.